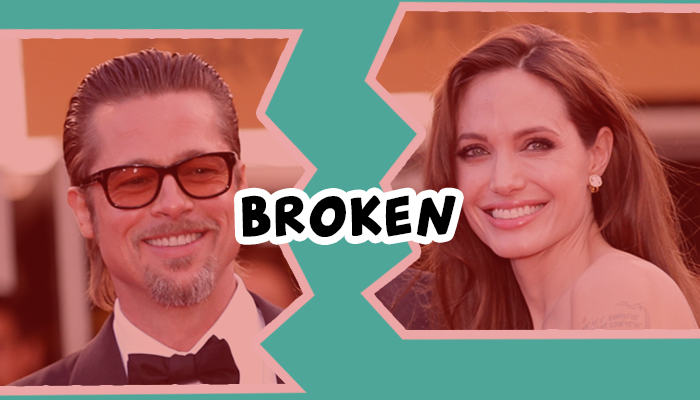 So the highest marriage profile of Hollywood is over! Yes, it’s about Brangelina. Angeline Jolie Files Her Divorce. This couple is always the hot topic for viewers, both celebrities have die heart fan around the globe and now BBC confirmed that Angeline Jolie Files Her Divorce. Yes, Angelina Jolie has filed for divorce from her husband Brad Pitt, due to the irreconcilable differences between them. The couple’s relationship has always been in the target of anger, misunderstanding and change of nature.

In 2014 Jolie married to famous Hollywood actor Brad Pitt. This relationship was hot in news since 2004 when they perform as co-stars in the film “Mr. & Mrs. Smith”. At the time Brand was married to another famous actress “Jenifer Aniston”. Soon they announce their splitting news and Aniston filed for divorce after few months in 2005.

Not even waiting a single moment the new couple’s photos with their adopted child become on the surface in Kenya. In early 2006, Jolie adopted daughter Zahara from Ethiopia and further announced that she and Brad are expecting a baby. In May Jolie gave birth to a baby Girl-Shiloh. While in March 2007 she again adopted a boy “Pax” from Vietnam and in July 2008 she gave birth to twins knox and Vivienne.

Soon in 2012 the couple announce their engagement. Brad shows his support to Jolie when she underwent a preventive double mastectomy.

Meanwhile the gorgeous Lady-Angelina, face some health issues. She says, “My doctors estimated that 87 percent risk of breast Cancer and 50 percent risk of ovarian cancer, although the risk is different in every women’s case.” In her article for the “New York Time” she says, “Once I knew that this was my reality, I decided to be proactive and minimize the risk as much as I could. I made a decision to have a preventive double mastectomy.”

The couple got married finally. The marriage was small, private and held at Chateau Miraval in the Village of correns. In the following years Angelina Jolie’s health issues catches many headlines. When she had her ovaries and fallopian tubes removed to get secure against cancer.

In general, the marriage was always in trouble because of cited irreconcilable differences. Without any doubt the couple’s miss fit marriage news catches attention many times. The reason behind why Angelina Jolie files her divorce contain many reasons.

By the release of “By the Sea”, a relationship drama-written, directed and produced by Angelina Jolie in which the couple both star in, Jolie told that she and Brand have our issues. One of the main reasons that Angelina Jolie files her divorce, she explains-“We have fights and problems like any other couple. We have days when we drive each other mad and want space, but the problems in the movie aren’t our specific problems”.

Jolie and Pitt nickname- Brangelina, was giving by their fans have known as the best couple in Hollywood.

Although it focused on a couple trying to repair their marriage while staying in a French Hotel. That’s all about the big Hollywood starts life, hoping for their soon patch-up.