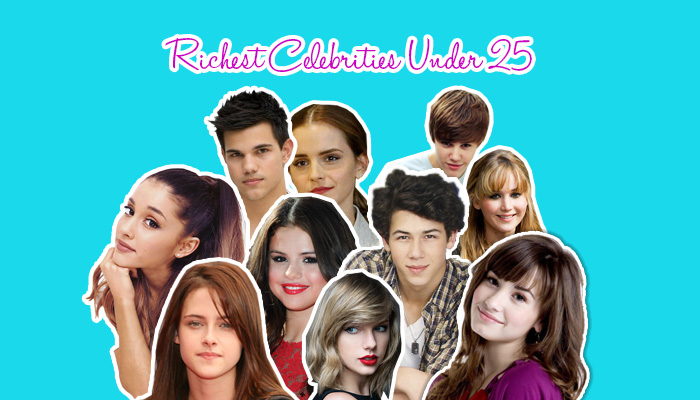 Coming at number 10, we have 23 years old pop princess Ariana Grande. This pop girl has made $12 Million so far. Began her career in a TV show called Victorious in 2009 at Nickelodeon’s channel has now become an American pop singer.

Demi Lovato hits this list at number 9. This hot girl is only 24 years old known as singer writer and actress. She is popping $15 Million in her bank account. After making her first debut in Barney as Friends, later she started making all kind of her money from Disney’s hit show “Sonny with a Chance”. The child star actress involved in pop sensation and become a huge singing star.

Number 8 goes to our girl Selena Gomez. Who has a net worth of $16 Million and also got cast as a child star on Barney and Fiends. She has also headlined in pretty, epic movies. Right now her music is her money source highlighted in many movies.

Nick Jonas coming in high at number seven. This guy is also 23 but earns $18 Million net worth. This singer made some major waves in his career. Nick was a member of hugely popular band “The Jonas Brothers”. But then turned into a mega solo pop star and his bank mainly earning are coming from as a musician.

Taylor Lautner is at number six on the rich list. Dude is rolling into the money, by being featured in the movie “Twilight”. He is only 3 and has made $40 Million although he works quite frequently. His bank account is pretty much made from “Twilight Series”.

At number five we have the major hottie Jennifer Lawrence from the hunger games. The girl is 25 years old and has estimated worth of $50 Million. This amount has the major part due to her major role in “Hunger Games”. However, she is working on multiple movies and being paid handsomely.

Next, we have Emma Watson, also known as Hermione Granger in the Harry Potter film series. Emma is 25 years old, having $60 Million net worth. She has earned a lot of money from Harry Potter series, plus she is working on a number of films which pretty much helps her making her music this huge amount. Emma is also one of the most successful young artists.

In at number three we have twilight star Kristen Steward. Who is 25 years old and has made $70 Million. Kristen has topped the list of the highest-paid actress in the past. She also starred in “Snow White the Huntsman” as well as American Ultra.

At number two we have Justin Bieber, an internet sensation and not only that he is just about to take over the world. Justin is just 21 years old and has a net worth of $200 Million.

Coming up at number one the earliest of the highest paid celebrities under 25 is none other than Taylor Swift. Taylor has made over $240 Million in her lifetime and

So guys, here we discuss the richest celebrities under 25. Well, I think many of them were the huge Disney stars make best decisions to make a big move. However, at GetTopTrends, we keep you guys in touch with latest and effective news and trends. Hope you guys enjoy!

Related Topics:riches celebrities under 25
Up Next