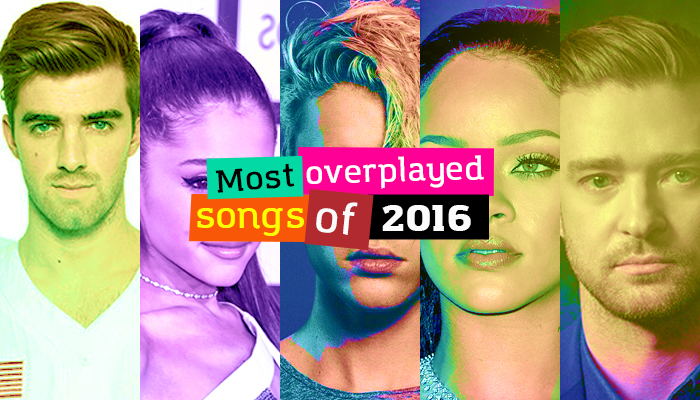 Most Overplayed Songs Of 2016

Listening to a new song on the radio always gives pleasure until it gets overplayed. Well, 2016 was undoubtedly the year of massive hits. So we gathered some “most overplayed songs of 2016” for you guys.

The given list is based on the most played songs of the year. So, it might be not safe to say that each of you is going to like this list. Like it or not, if the song is popular, it is going to play over and over again on the radio and internet.

Even if you don’t know the names of Fifth Harmony’s, you may know them by now as they love working from home! The song was recorded by American girls group and released on Feb 26, 2016. The song topped out at No. 4 on the Billboard Hot 100 in its 13th week on the charts with 88,000 downloads.

The song Hello was the release of Adele’s third Album “25”, which was released on November 20, 2015, but it still continue ringing for months and months. “Hello” played on the radio multiple times in one day.

Sorry by Justine got 2 billion views on YouTube in a little span of time. The song itself become a popular way to apologize, with exotic dance moves. “Sorry” peaked at No. 1 on the Billboard Hot 100 throughout 2016, along with Bieber’s other hit singles “Love Yourself” and “What Do You Mean?”

“7 Years” is one of my favourit and I’m sure this song is going to be stuck in our minds even we’re 60. A smash hit in the band’s native Denmark and also throughout Europe, “7 Years” was released in September 2015 but caught fire in the United States in February, topping out No. 2 on the Billboard Hot 100.

Well, who don’t love Rihanna? This hot lady left a massive musical footprint in 2016, thanks to her eighth studio album “Anti,” released in January, and to her features on Drake’s album “Views,” though none bigger than her lead single “Work.” The song was on Billboard’s Hot 100 for 36 weeks and peak on No. 1.

OMG! So this band really snatche audience attention with their hits “Don’t Let Me Down” and “Closer”. Both songs were topped on No. 3 and No. 1 on the Billboard Hot 100, respectively. “Closer” dominated the charts, holding the top spot for 12 consecutive weeks.

Ariana Grande gets the influence of her song so much that her Twitter bio says, “dangerous woman.” The lead single of her album with the same name, “Dangerous Woman” peaked at No. 8 on the Billboard Hot 100.

So that was the list of most overplayed songs of the year 2016, while many of them are still in the air. Let me know if you like the list and also share your reviews.

Related Topics:Most Overplayed Songs Of 2016
Up Next