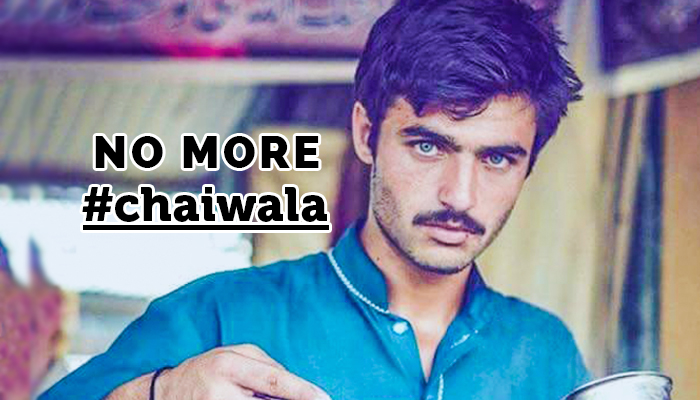 Miracles do happen! This 18-years old charming Tea Vendor aka Chai Wala has taken over the entire social media with his suave appearance. A well-known Pakistani photographer, Jiah Ali captured his picture on a photo walk in Islamabad, which went viral in seconds! Mr. Khan who’s real name is Arshad Khan has become a hot celebratory now these days.

Ms. Ali, who captured and uploaded this momentous picture on Instagram, expected the global response by captioning it simply with “Hot-tea” followed by a wink.

“I was very surprised when it got famous – to me, it was a normal casual post!”

Ms. Ali, a fresh media graduate who covers weddings and events in Islamabad, said she was quite elated for Mr. Khan.

“I’m very happy for him, he deserves this. He’s a really nice kid. I just hope he can handle the fame and not be exploited by greedy people.”

This overnight newly found fame turned Arshad Khan much delighted as before. Three months back, he used to be a fruit-seller at the same Sunday Market in Islamabad. But later on, he changed his mind and started working at the tea stall brewing himself a cup of unexpected fame. Hailing from the city of Mardan in KPK Province, he has got 18 siblings.

Mr. Khan added that he would love to accept modeling offers and it seems like his wishes are coming true. Since people are curious to know about his reaction to this, he appears quite confused and dazed but happy at the same time.

He left a message for his fans,

“Shukriya aap sab ka” (Thanks to you all)

While asking Mr. Kahn to what star he resembles most, he admirably responded, “Shah Rukh Khan” to the cackles of the crowd surrounding him.

Moreover, the handsome Chaiwala has signed his first modeling contract with fitin. pk, an e-store based company in Islamabad. After signing up, Fitin.pk has uploaded several pictures of the new model with a caption saying “Chai wala is no more Chai Wala, he is fashion Wala now”