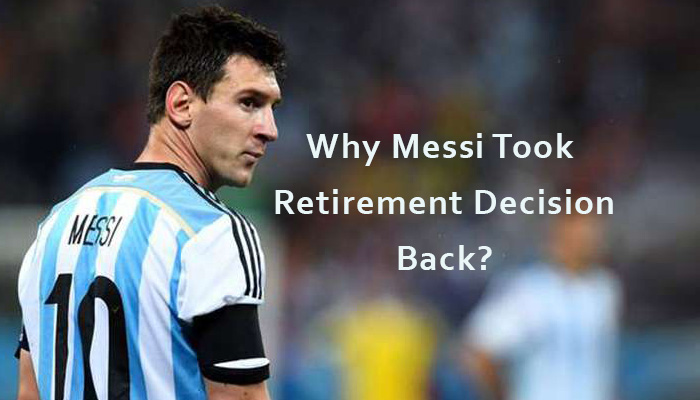 Leo Messi is one of the top-class football players in the world. He plays for Spanish club FC Barcelona and Argentina National Team. He is known as the best football player in the world and also rated as the greatest of time in sports.

Moreover, Messi is the only football player who won five FIFA BALLONS d’Or. Recently, he decided to retire but his billions of followers and fans requested him to take retirement decisions back. Here, we are going to discuss that why Messi took the retirement decision back.

In his recent Copa America finals with Chile in 2015, he announced to take retirement as a result of match loss. The match was between Argentina and Chile, both teams struggled but the score was 0-0 even after two hours. In penalty, Chile once again nabbed the title.

Despite it was time to celebrate for Chile, Leo Messi becomes the center of attention as he missed the penalty goal for the first time in his career history. The football star was also caught on camera with a distraught face and tears in their eyes.

Soon the match ended, Messi told reporters that he is done playing with the national team. Moreover, he expresses himself as “I tried my hardest. It’s been four finals and I wasn’t able to win. I tried everything possible. It hurts me more than anyone, but it is evident that this is not for me. I want more than anyone to win the title with the national team, but unfortunately, it did not happen.”

Messi announced his retirement after the match. The News shocked everyone. Romero said, “I can’t imagine a national team without Messi”. Well, Messi faces a lot of critics after it.

Messi Decides to Play Ahead

But the news is now in that Messi says that he’ll not retire from international soccer. Sitcom comes from Argentina Newspaper which says that Messi will come in November to play for La Albiceleste, which says that his initial announcement about retirement was just the heat-up result of match losses.

It can be stated simply that Messi will return for his career as he is much focused on the upcoming world cup 2018, where he will play against Russia and able to win the title for Argentina. At the age of 29, it sounds quite pretty that a man who is one of the best players in the world will come back and play for his nation.